A NEAR DAWN ~ A Psychological Thriller

We're starting up production again on our larger, more epic project - A Near Dawn!

It is a psychological thriller adventure with humorous highs and gut-wrenching crashes. A Near Dawn is planned as a series that starts grounded in our reality and takes a sharp turn towards the bizarre as elements of science fiction and supernatural emerge over the course of your journey. We are hoping for a demo release of the first chapter "A Day in the Life" early 2017. 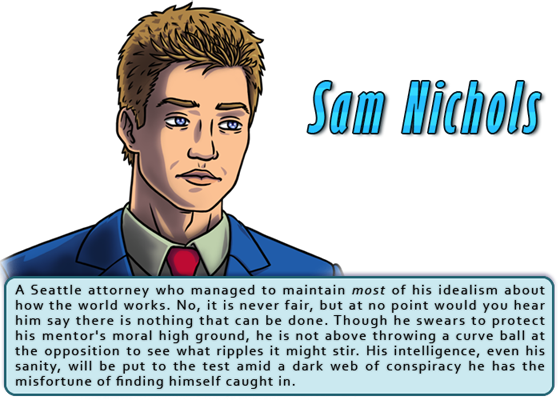 The story places you in the shoes of our main character - Seattle-based attorney Sam Nichols - who seems to be experiencing some disturbing psychological difficulties and is exposed to progressively dire circumstances that threaten to unravel his reality and destroy those closest to him. Though haunted by personal demons, with your law firm struggling and on the brink of collapse, you take the helm on an important new case involving a ruthless multinational corporation, defended by the vilest people you have ever encountered. The odds already seem stacked against you and as you learn things are not as they appear, a deeper conspiracy begins to emerge. Where will you end up if you continue untangling the threads? You will have to be brave to discover the truth. 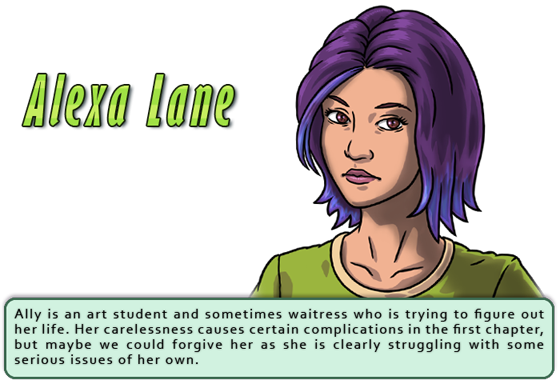 A Near Dawn is a visual novel adventure game with puzzles, dynamic decisions, and multiple endings. You will be in control of your character’s actions at every turn. You will explore the environment and speak to the other characters to learn about what is happening and what needs to be done. It was important for us to give as much freedom and put as much detail into the content of the story as could be managed, as such you will have the option to skip key elements of the game not necessary for advancing the main plot if your character chooses to ignore them or fails to explore them.


@LeonDaydreamer
Posted by Far-off Daydream Games at 8:51 PM No comments:

The Face of Evil: Releasing My First Indie Game! 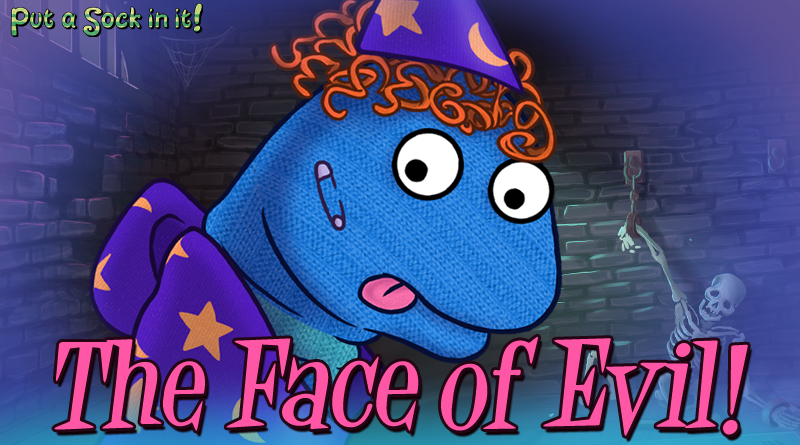 Put A Sock In It! was my first proper release, and it was quite a challenge managing the social media, promoting it, etc. I've really come to understand how that can be a full-time job all on its own, especially if you're not established in the industry and don't have a following yet. Of course, creating interesting games is probably the best way to establish yourself. One thing I learned with releasing Put A Sock In It! was that no one is going to go out of their way to spread the good word about your game. You could have created the greatest, most beautiful thing in the world, and it will still be your own little secret if you don't put in the work to reach out to indie game reviewers, YouTubers, fellow independent game developers. I tried a little bit of everything, sending things out to game sites, certain people on Twitter, Facebook. Just friendly messages not spam, because that's annoying for everyone. I have no idea how it can take so much of your time, but it can get pretty demanding. The process really sucked me in for a while there, I would be keeping track of things almost hourly the first week or so. Eventually, I had to leave well enough alone and move on. I'm not someone who can keep doing the same thing over and over. That's probably why there are so many 'marketing professionals' you can find all over the web. Creating, designing, developing and publishing your game is the hardest part, but once you're done with that you're still a long way from being finished. Next you have to sell your game, even if it's free like in my case, and what that really means is getting attention.

Eventually, I caught a break with a really positive review from Free Game Planet, which was immediately followed by this exceptionally wonderful surprise:

GloomGames, a popular YouTube let's play celebrity featured Put A Sock In It! in all its nonsensical glory in one of her videos, which at this moment has over 100, 000 views! Frankly, it was amazing just to see her get into the game and and have fun with playing out my writing. There were a few other similar videos that popped up as well. This really helped the game get some notice for a little while, but more importantly it was very encouraging for me. The satisfaction really comes from having someone enjoy something that I created. 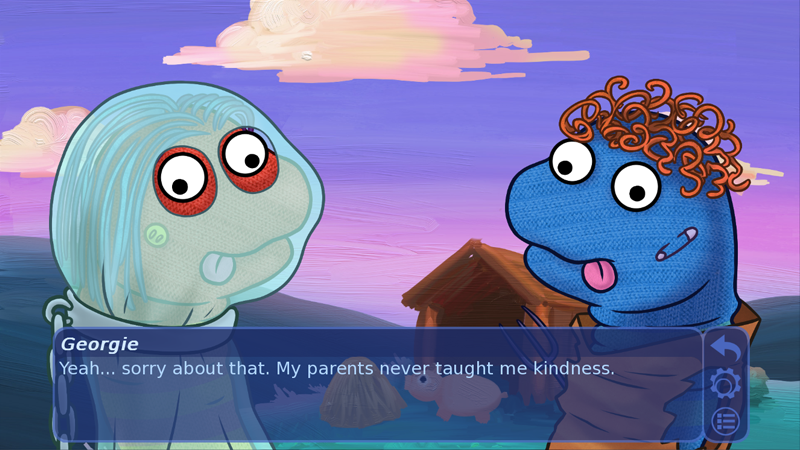 YOU CAN GRAB PUT A SOCK IN IT! FREE HERE:

@LeonDaydreamer
Posted by Far-off Daydream Games at 10:51 AM No comments:

The Socks Have Arrived!

After months of sock puppet nonsense, in the literal sense, our game Put A Sock In It! is finally out. You can download it for free from the Itchio site via the link above. This is the first release from Far-off Daydream Games, and I am looking forward to hearing feedback and comments from connoisseurs of odd and eccentric indie games, and fans of the visual novel medium. 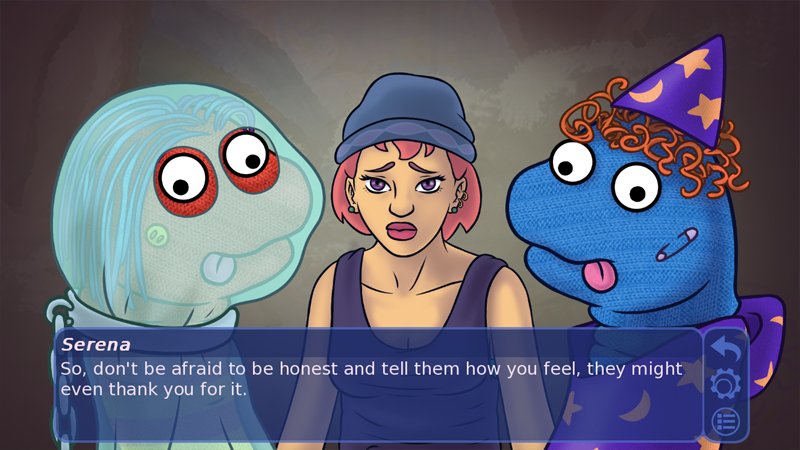 Put A Sock In It! is a humorous choose-your-own-adventure type game that sees a crafty young girl who is particularly good at distracting herself make the most of being locked out in a stairwell -- she begins playing out little skits with some sock puppets she's just made! To play the game, you will select a pair of sock puppets to go up against one another, for a total of four combinations: Princess x Wizard, Ghost x Stable Boy, Wizard x Ghost, and Stable Boy x Princess. Each pairing gives you control of the conversation and relationship from one of the characters' point of view. For example: in the Princess x Wizard pairing, the Wizard abducts her and you play as the Princess, guiding the story where you want it to go with her reactions -- do you hate him, or could this be love? 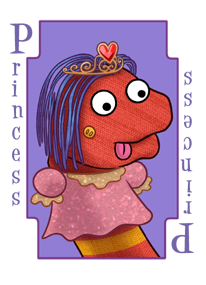 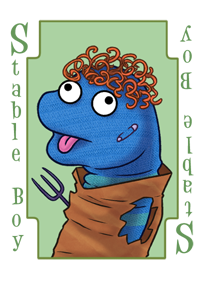 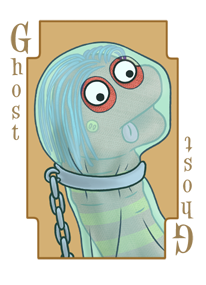 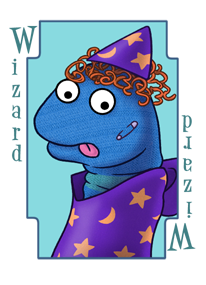 The storylines range from romantic melodrama between the innocent Princess and awkward Stable Boy to merciless quarrels between the evil Wizard and spooky Ghost. Altogether, there are about 90 Unique Endings, but that's not the icing on the cake. This is: there are 30 Lessons that Serena and her sock puppet friends will learn, and you have to help her learn them all in order to finish the game.

I dedicated this game to my father, Arkady Pilchin, who sadly passed away in early August. He was a wonderful person who did so much for me and meant so much to me. He always greatly encouraged me in all my interests, and I am glad that I was able to show this game to him before the end.

@LeonDaydreamer
Posted by Far-off Daydream Games at 5:55 PM No comments:

The Start of Something New: A Far-off Daydream

Did I just quote High School Musical in the title of this post? That film had a charm to it anyway, I will stand by it.

So this really is the start of something new. I registered a website (www.faroffdaydream.com) and finally decided on the colours for my logo (okay, I may yet revise it, but this is the third iteration already and I ought to learn to leave well enough alone sometime). Just look at those rays of blue light illuminating a bright new future. An inviting glimmer of hope from beyond the distant clouds raining down upon us. Oh, what will tomorrow bring? Who can say, but don't stop dreaming!

I don't feel like fully introducing myself in this post, I'll leave that for later, but my name is Leonid Pilchin (@LeonDaydreamer) - artist, animator, writer. I have worked in the animation industry for nearly 10 years, that is working on other people's stories and projects, mostly television cartoons. I happen to believe that I have some really good story ideas myself, and my standards are quite high. For the past few years I continued to feel this never quite satisfied urge to actually do it. To tell my own stories, build the plot, characters, relationships, suspense, drama, comedy, from the ground up, really put my soul into it and create something that I can be proud of.

For the longest time I didn't even know where to begin, my ideas were so huge and epic I would get overwhelmed just thinking about them. Somehow, I stumbled upon Twine a couple of years back, it is a very intuitive and simple to use program to create text-based interactive fiction. After a little experimentation, I picked it up and impulsively began writing a text-based adventure game, Back To Reality; which I have been taking a hiatus from to work on Put A Sock In It! At any rate, I surprised myself with the quality of my writing, and the characters I was able to put together. Before I knew it, I had an interactive game with conversations and puzzles to solve. And it is so instantaneous with Twine, you just write it into the program and it is already playable. It was very liberating not having to worry about spending weeks and months on character designs, background artwork, even user interface, you have a playable prototype almost as quickly as you can think of it. I was amazed and it was quite addictive for once actually sitting down and telling my own story from beginning to end without having to worry about all those things I would otherwise get overwhelmed about. I have other feelings about the experience, but I will leave that for another post as well.

Right now, I feel like I am taking a big step. I was looking at a fork in the road for the longest time and I wasn't sure if I should go back to the animation studio environment where it is safe and you know where your next paycheck is coming from, or stay on this path I have been exploring for the past couple of years and seeing where it leads me. All I know is that I never felt as fulfilled working on other people's scripts, with other people's designs, and off of other people's storyboards, telling stories the way they have been planned out long before they even reach me, as I have creating my own. I can think of few things more important than that. So for now, I will follow those bright blue rays of light and daydream about how they will bring me to where I really want to be. I'll let you know how it goes.

@LeonDaydreamer
Posted by Far-off Daydream Games at 8:12 AM 2 comments: